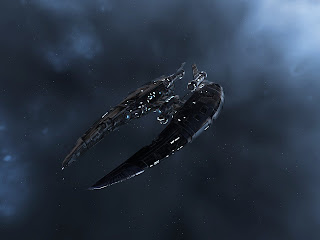 Well, after being abroad for a week or so, I've finally found a computer that has a keyboard that does not drive me crazy. I'm not getting into New Eden, but at least I can post.

I've been playing around with different Malediction fits acting as fleet tackle, and this is what I have largely settled on:3 Rocket Launcher IISalvager (offline)Catalyzed Cold-Gas Arcjet ThrustersWarp Disruptor IIMedium Shield Extender II (actually using a meta module until I get Shield Upgrades IV trained)Damage Control IIMicro Auxiliary Power CoreCo-Processor IISmall Ionic Field Projector ISmall Targeting System Subcontroller IWith perfect skills (which mine are not) this ship has 5518 ehp (albeit with a massive resist hole over EM), does 3994 m/s before overheat, and has peak shield regen of 14 hps.I enjoy the fact that this interceptor is both fast and solid, and I like flying it in fleet engagements.However, there have been a number of roams recently where I have been acting as fast tackle for the gang but the target has been very, very fast. What ends up happening is that only Suleiman can actually keep up, so I hold point while Suleiman solos the ship (everyone else is trying to reach the fight).That works fine when Suleiman is around, but when he's not it's just me and the target, and I either die or have to let them go. So I was thinking about trying to fit a web onto my Malediction as a way of helping the gang catch up. Not something I'd use in most cases because I don't want to get that close. However, being able to actually slow a target when needed could be very handy.Here's what I'm thinking about:3 Rocket Launcher IISalvager (offline)Catalyzed Cold-Gas Arcjet ThrustersWarp Disruptor IILangour Drive DisruptorDamage Control II200mm Reinforced Rolled Tungsten PlateAdaptive Nano Plating IISmall Ionic Field Projector ISmall Targeting System Subcontroller IThis has 5872 ehp, does 3659 before overheat, and has a negligible shield regen (4hps). However, the resists are very even, with 61% being my lowest resist.So, does this fit look like an improvement over my current fit? I'm not interested in moving to something with significantly less tank, so I guess what I'm asking is if the addition of a web and 300 ehp is worth the loss of 300 m/s and 10 hps?An alternative (on the armor tanked Malediction) would be to swap the nano plate for an Overdrive Injector System II, which gives me only 5168 ehp (which I guess is still decent for an interceptor, if a little low for my tastes) but brings my speed up to 4116 before overheat.
***
Since writing the above, I've considered some of the suggested fits that people have shared in the comments to my earlier posts. However, I'm convinced that I NEED a long point (although a scram instead of a web is totally reasonable).
The reason for this is the way that Tuskers fly. The typical gang that I fly point for is a nano/kiting gang that keeps range while focusing on one target at a time. Life is easiest for a nano gang when all your targets are moving at roughly the same speed. If the primary suddenly grinds to a halt because I've hit him with a scram, the gang is faced with two choices: break speed to keep within weapon range (which lets the rest of the gang catch up to them) or switch to a new target (which means the dps up to that point has been wasted). Neither are good options.
On top of that, though, is the general safety and convenience factor; I don't need anything but a long point against most targets, and that keeps me safely out of neut and scram range. The wider orbit also lets me outrun drones and reduce missile damage. All plusses.
So feel free to comment on the above fits, and recommend changes, but do keep in mind that at the end of the day I'm looking for a rock solid interceptor with the ability to catch and slow a nano ship as well as a long point.
Posted by Taurean Eltanin at 00:09

Email ThisBlogThis!Share to TwitterShare to FacebookShare to Pinterest
Labels: malediction

Subscribing for the first time?