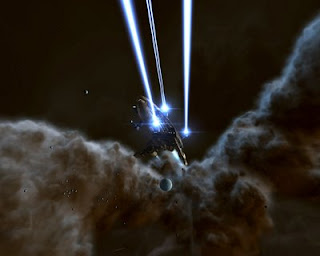 Following on from my last post, I decided to go all out on my Punisher. If I was going home in a cloud of vapor, it would not be because the fit let me down.

I went with the neut over the nos because I believe, long term, this is the better choice. Against other frigates, it makes up for the missing mid slot, and also provides some 1v1 gtfo if you can shut down their point . I recognize that right now my neut skills are weak, but I don't want to be leaning on the nos if I don't intend to use it long term.

I started with a short roam through low sec, but I saw no viable targets. Flashy reds in tech 2, mission runners in battle cruisers or battle ships, that sort of thing. Leaving low sec behind, I started to cruise through some of the busier areas of high sec, where I have had fights before. Of course, the problem with high sec is that very few people will engage you if they are not pretty sure they will win.

I was passing through some belts when I came across an unattended can. Show info informed me that the pilot was less than a month old, and in an npc corp. Some further searching through the local pilots led me to a Punisher holding distance the far end of the belt. I guessed that he was looking for a fight, so I flipped the can.

I did not want to scare him off, however, so I started down the belt in a leisurely fashion, as if I was unaware of him, and had just scored some free Veldspar. Sure enough, as I passed him, I was locked, scrammed and nos'd.

Activating my own scram and afterburners, I also hit him with a few cycles of my neut. While I appreciated that I had little to no capacitor advantage over another Punisher, I guessed that my cap skills were better than his, so it was unlikely to hurt, even if it was unlikely to help.

We both went into orbit and opened fire on each other. This was the first fight that I had not been webbed, and the added speed meant that I was barely hitting him. My overview confirmed that I was at the upper end of my tracking.

I increased my orbit from 1000m to 2000m and started hitting more regularly. My combat log was still showing "barely scratched" about half the time, so I will need to take another look at my default orbits, or think about cutting my speed under these circumstances.

On the other hand, my opponent was having even more difficulty landing hits. I'm guessing that, as unfocused as my skill progression had been, I still had more points in gunnery than him. This, and my T2 guns, meant that  he was into structure just as I was entering into armor.

As is so often the case, the outcome was clear long before it arrived, but this time I was on the winning end. My opponent exploded, giving my my very first kill!

Elated, I convo'd my opponent to give him a gf. A pilot after my own heart, he told me that he had indeed been in the belt looking for a fight, and that the whole thing had been loads of fun. I dropped his kit off in a can and told him he was welcome to have it back, and wished him good hunting.
I did keep the Scrambler, though, as it was better than mine, and if I'm going to make a living at this, I need to gain something from the fight.
Post battle review:
Well, my dps is still poor. However, this time it is my fault as a pilot. I did not control my range and speed sufficiently to maximize my dps. I can at least console myself that I noticed the issue and took steps to correct it. I also need to recognize that my opponent, while lacking in skills, actually had a pretty decent tank. The Punisher's natural resistance to EM, the pilot resistance bonus, a damage control and resistance plating all add up.
All told, it was not a particularly challenging fight, as I had a huge skill and fit advantage. Equally, only minimal piloting was required. However, it does drive home just how much of a difference focusing on your skills and investing in your ship makes. Two weeks ago, I was that guy, except with a worse fit tank (his high slots leave much to be desired). Now, I am able to take him on with relative ease.
Equally, I need to recognize the vast gulf between me and older pilots when it comes to character skills and equipment. This gulf will narrow over time, but I need to continue focusing on choosing targets intelligently, or I am simply going to be turning my ships into very expensive fireballs all over New Eden.


Lessons for the future:

I need to exercise greater control over my range and speed. While I will often be unable to control these elements as much as I would like, I should not be ignoring them.

With patience, appropriate targets do exist, even for people of my skill level.
Posted by Taurean Eltanin at 12:54

Subscribing for the first time?